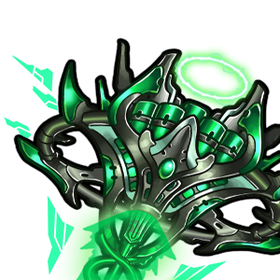 Zemora Voidbringer is a legendary Green unit with unique properties which totally redefines games in which it is a factor.

Zemora Voidbringer is a unique unit, both in that each player can build only one per game and that it spins the game in a very particular way. Its

8 Attack. While extremely efficient, Zemora requires preparations if it is to fire every turn from when it is first ready. Making those preparations forces players to adapt their build plans for the whole game, but if successful it will be well worth it.

Typically it is best to buy the Zemora early on in the game whie under little pressure from the opposing player, especially since 6 turns of

build time is a long time to wait. Zemora can be bought as early as turn 4 without sacrificing economy as Player 2, but at that point it will likely be the only thing one can buy that turn (except Drones), effectively putting players one turn behind your opponent. From then, players will have to build up

Green. Once Zemora starts firing the large amounts of

Gold it grants will allow players to increase their Conduit count, but in the meantime gathering at least enough for the first shot is required. Aiming towards producing at least

8 per turn by the 3rd shot to ensure continuous fire is strongly recommended.

Since setting up Zemora causes significant delay, both due to build time and due to the buying of Conduits, players will have to play defensively for the early-mid part of the game. As such it is at its best in slow, high econ random sets. Conversely that makes it a risky proposal in sets with no good defensive options, or sets with low-cost attack-producing units that can easily be rushed, such as Electrovore or Tia Thurnax, so as usual players should pay close attention to the set before investing in Zemora.

Curiously, although Zemora is mostly good in sets where a third Engineer would be correct, you should very rarely if ever get a third Engineer if you plan to use Zemora. Zemora needs to be bought early in the game so much so that it's better to buy early Conduits to get Zemora as fast as possible (or close to it), and let your green store for a while, you continue to increase your economy.

If Zemora is on the board during a breach, trying to destroy Zemora is not advised due to its extremely high health. If it can't be activated due to a lack of green, it is completely harmless leaving plenty of time to destroy it. There are only 10 supply of Conduit, so once more than 2 Conduits have been destroyed and the other player has no more Green stored there will be turns during which Zemora can't be clicked. This will often mean the end of the Zemora player.

The go-to opening for player 2 is this:

However, in some sets player 2 may choose to go faster:

P1 has the fastest opening with Vivid Drone (or Doomed/Galvani Drone) This cuts most Economy though, as well as being Breach-vulnerable.

You should plan to produce 8

efficiently while Zemora loads. A build that maintains a buffer is shown: