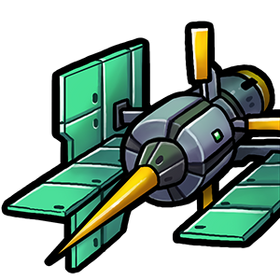 Kinetic Driver is a Green unit.

Kinetic Driver is a 1

ability. This ability sacrifices the Kinetic Driver plus 2

in order to destroy any Animus, Blastforge, or Conduit. This does NOT include other similar-but-different structures like Synthesizer or Steelforge, and also does not include units that are Under Construction.

because the Kinetic Driver is dying anyway). However there are some cases where you might want to use it before then. For example, killing your opponent's Animus the turn before they buy an Amporilla is a highly cost-effective use of a Kinetic Driver. Not only must your opponent pay 6

to buy a new Animus, but they will have to wait another turn to double their Tarsiers'

Another use is to control your opponent's defense options. For example, killing a Blastforge can force your opponent to buy two Rhinos or two Forcefields in lieu of a standard Wall. For Rhinos, this forces them to pay 10

rather than the Wall's 5

(albeit they get 1 more defense for the increased cost), and forcing your opponent to buy Forcefields means losing two drones - this is not even to mention that they must rebuy the Blastforge unless they want to do this again next turn. And if you can leave your opponent without enough resources to buy those inefficient defenses, you can force them to leave drones back or even suffer a breach. This advantage is only increased in sets where more powerful defenses are available. For example, in a set with Polywall, your opponent must pay even more to get the equivalent blocking strength.

This one is a good example of Kinetic Driver being used to deny an important purchase (Arka Sodara): 7ktde-HjSrY