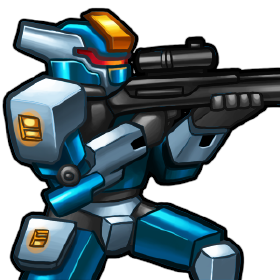 Deadeye Operative is a Blue unit. It has a game-changing ability to cut down opponent's economy.

Ability to take out your opponent's economy, being able to destroy three Drones per Operative regardless of any of your opponents

blockers. Next to no other unit in the Random Set provides this ability with the exception of Apollo.

Deadeye Operative effective reduces Drone supply by 12, making it generally a must-buy in sets where you would normally want many more than 15 Drones. Remember that Deadeye Operatives can hit Drones, and ONLY Drones, thus Wild Drones, Vivid Drones, Trinity Drones, and Doomed Drones are immune to their

Ability. Thus you should be careful about going for Deadeyes if your opponent could convert all of their Drones to some alternate econ unit before your Deadeyes run out of stamina.

In sets where Deadeye Operatives look desirable, it is common for Player 1 to open with:

And continue buying nothing but Drones, Engineers, and Deadeyes until all the Deadeyes have been bought.

Player 2's most common build is the following: