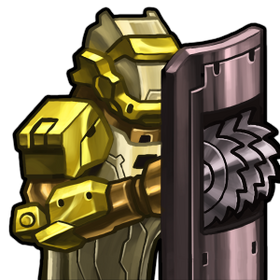 Xeno Guardian is a

Green-blue unit. It is a strong defensive unit which provides

constant attack while it

Xeno Guardian is mainly a defensive unit, as it only produces 1

each turn while costing 5

, making it inefficient for attack. Its merit is instead found in having

4 at a fairly low cost, making it better suited to being the backbone of one's defense compared to both Walls and Steelsplitters since it both absorbs an additional damage each turn and attacks for 1

at the same time.

Xeno Guardian is very apt at dealing with opponents using chill in general, and Frostbites in particular, thanks to its ability to both

Block at the same time (see Vigilant in the Glossary). Since Frostbite only freezes for

4, which is very inefficient. An opponent massing chill is one of the cases where going for Xeno Guardian mass production is justified.

Assuming there are no

Health in the set, Xeno Guardian is a powerful unit and players should generally try to get at least one during the game. Buying Xeno Guardian as preventive defense to be used simply to soak damage is rather inefficient but acceptable sometimes, especially if the alternative is to waste

. Then it works like an Infusion Grid and a Gauss Charge for

Units that spend Energy, such as Electrovore, since rushing Xeno Guardian leaves the Engineers little defensive relevance on early turns.

Cheap or double Blue units, such as Oxide Mixer or Deadeye Operative.