(Fragile: does not heal)
This unit has

12 maximum health.
At the start of the turn, restore 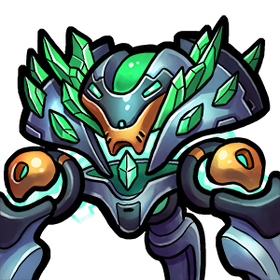 Xaetron is a Green unit.

Xaetron is an efficient and extremely flexible unit, especially if it's convenient to get the

necessary to buy it. You should buy it in almost any set where getting even one Conduit seems otherwise desirable. Sometimes it's even good to get in sets with no other green units.

The simplest way to use Xaetron is simply using it as a back line absorber every turn. Since Xaetron heals four health per turn, using it like this is like having an Energy Matrix, which absorbs for four every turn.

A more efficient way to use Xaetron defensively is to combine it with other absorbers. If you absorb on another unit, Xaetron still gets full value via healing. So if you absorb with Xaetron every other turn and absorb with a Doomed Mech every other turn, then it's as if you're getting 4 + 8 = 12 total absorb over the two turns -- the same as if you had a Defense Grid. However, this does force you to overdefend quite a bit every other turn, so it may not always be worth it.

Xaetron excels even more when your opponent has abilities which typically abuse inflexible defenders. For example:

The main situation where you would not want to get Xaetron is in a set with Defense Grid or Centurion. Because these absorbers must be kept alive at all costs, you can't really alternate between them and Xaetron, because you can't sacrifice them on the turn you want to absorb on Xaetron. This forces you to overdefend every turn instead of every other turn.

The click ability is used less often than simply using the health for defense, but it's not bad. It's almost certainly a good idea to use the click ability in any situation where your Xaetron would otherwise lose healing value due to being at the health cap. It's also a significant enough chunk of damage that you should try to line up your Xaetron clicks to sync with other sources of pressure like Scorchilla or Cluster Bolt. (Note that if you build up Xaetron to 11+ health, you can click it two turns in a row.)

Xaetron has good synergy with double-Animus units such as Lucina Spinos and Tatsu Nullifier. Compared to a blue absorber, the green can be floated on the turn you buy a double Animus unit as opposed to wasted like you might have to do with blue, and also the low gold cost of Forcefield helps alleviate the tendency of these units to lead to wasting red.