(Frontline: can be attacked directly)
At the start of your turn, gain 2 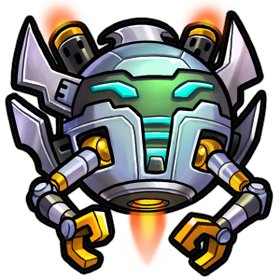 Wild Drone is an economic Colorless unit with

Wild Drones are a very effective economic alternative in the early game in case of aggressive sets. Costing 5

energy for an income of 2

is a savings of 1

over buying two Drones. This can help accelerate your early game with an earlier Blastforge or Animus buy. The main downside of Wild Drone is that, with Frontline, it can be targeted by opponents directly and mitigate your ability to use Walls or other defenses for their absorption.

In a game with Wild Drones, you do not want to go full on into Wild Drones due to their ability to be targeted, especially in games where building up to 3 attack is easy to do. Buying enough Drones is still a high priority for feeding the mid-game and late-game economy.

However, if one were to think of Wild Drones as 'defenses' rather than 'economy', Wild Drones can be considered one of the best health/gold cost units in the game. For the effective price of 3

(after the initial payback of 2

3 points of defense. This is cheaper defense than most basic blocking units, and even better cost effectiveness than some more advanced defenses. Though it is true that Wild Drone does not have

Block, and that your opponent can choose to ignore it in favor of breaching (which they should, since

from going after the Wild Drone), you can sometimes leave your economy in plain sight as your opponent goes for the breach. Every turn after the first that the Wild Drone survives is just extra gravy in terms of cost effectiveness.

Wild Drones also do very well when combined with other

Frontline units, like the Hannibull, Shredder, or Iceblade Golem since you ultimately give your opponent the ability to shoot at multiple higher-than-average health targets.

Both players can use Wild Drone to build unusually fast high-economy openings in slow sets. For player 1, the following is possible, although it might not be wise to commit to so many Wild Drones unless you're planning on a breachproof or frontline-centric strategy:

For player 2, this is a common less committal opening: