From Prismata Wiki
Jump to: navigation, search
Vivid Drone
Colorless unit
(see more)
As an additional cost to buy Vivid Drone, consume 2 Drones.
At the start of your turn, gain 3 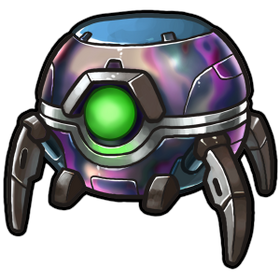 Vivid Drone is an economic Colorless unit which is more efficient and more breach-vulnerable than standard Drones.

Even counting that they cost 2 energy, Vivid Drones are much more efficient than standard Drones. This doesn't mean you should open with Vivids on your first turn, however: in the early game it is more important to buy multiple income per turn than to save a few gold. The exception is if you want to go for an extremely low-economy opening and get technology on turn 1 or 2 without wasting energy.

It is generally advisable to buy at any time when it fits on a medium economy, since its efficiency means the defending costs are less taxing, enabling more focus on getting Attackers.

Also be careful about reducing your base Drone count too much by building Vivid Drones if you want to make use of other units like Plexo Cell or Plasmafier (or even just Forcefields). Even if you don't plan on using other Drone-consuming units, getting rid of your last real Drones can deprive you of emergency defense capabilities and is likely a bad idea if there are powerful burst units such as Tia Thurnax or The Wincer.

In games where you know you want a very large economy, opening with a Vivid Drone + 2 Engineers on your first turn is more efficient than taking a typical 4 Engineer build using standard Drones. In the following builds, 1 represents Vivid Drone.

There's larger value for Player 1 with Doomed Drone (0). This in particular with medium absorb, efficient attack and no extra soak.

Similar to Drone, it can be played for preemptive

soak along with Drone-consuming units, although it's a limited niche due to Drone expenditure.

Taking a 1 turn delay as a 70% cost adjustment, this becomes very efficient.

Cost can be then considered as about 3