From Prismata Wiki
Jump to: navigation, search
This article is a stub. You can help Prismata Wiki by expanding it.
Valkyrion

, and construct 2 Barriers with

1 for your opponent
[data page] 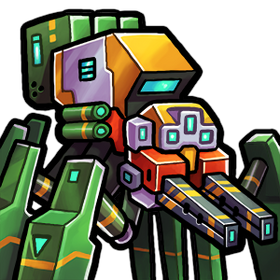 Valkyrion is a unit that adds a large amount of

when clicked at the cost of giving your opponent two Barriers for their next turn. If clicked constantly, it produces net 2

per turn, over the 2

extra at first since when you buy it threatens 4

before the Barriers. Still, this seems pretty mediocre when you consider that Mahar Rectifier is more convenient for the same constant attack, and is rarely bought only for its attack. However, the true point of Valkyrion is not raw efficiency but the potential to exploit the Barriers that you give to your opponent (by not dealing enough damage for the opponent to get value out of them).

Without combos, you can usually get about one good exploit out of Valkyrion by opening with one, attacking with it, then next turn holding it back and dealing 0 into their Wall + double Barrier defense, even absorbing on it. This is good value, but ussually not enough to make it a better strategy than other strong random set attackers. When Valkyrion gets really good is when the set contains combos that help you continuously exploit the Barriers. See the combos section below.

Valkyrion's blocking ability is also occasionally useful. It is similar to a Lancetooth in that it provides 2 constant

4 blocker. Therefore it should follow that like Lancetooth, a Valkyrion can be used as an absorber in a pinch, such as for denying Absorb, or late game when damage is high every turn and defending is difficult. It gives slightly worse value though, since the soak comes 1 defense later, thus Attacking is better.

Valkyrion is also a strong counter to

Frontline units and rushes. The

1 Lifespan Barriers you're giving your opponent are of no use if you're able to simply target units that can't be defended, sending little or no remaining into their defense.

Finally, Valkyrion can be used effectively in combination with synced

Exhaust attackers such as Iso Kronus or Scorchilla. The barriers will expire during the off turns of your assault.

Chill units, such as Cryo Ray and Shiver Yeti, allow you to deny the Barriers value by freezing them. This makes Valkyrion extremely efficient.

Units that allow you to spend your attack without dealing it into the enemy defense, such as Thermite Core, Bloodrager, Lancetooth, Mega Drone and Arka Sodara are also very effective with Valkyrion.