(Fragile: does not heal)
At the start of your turn, gain 3 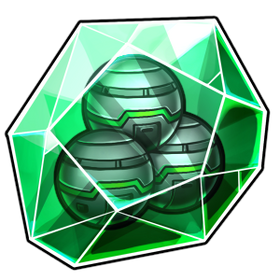 Since a Trinity Drone produces 3

per turn but consumes 2 Drones, buying a one is similar to buying a Drone when it comes to expanding one's economy, with a few differences. While slightly more expensive (as

is generally more valuable than

, it needs to take 5 damage before gold production is reduced, unlike regular Drones that are destroyed upon taking even 1 damage. This makes Trinity Drone a good enabler of breach-proof strategies.

Trinity Drone can also be considered a counter to Deadeye Operatives, since it cannot be sniped by them unlike regular Drones.

Note that regular Drones can have other uses than merely gold production (such as blocking or being consumed as part of certain costs) which Trinity Drone does not. As such, if you are confident that breaching will not be a large factor in the foreseeable future, buying a Drone is typically better than buying a Trinity Drone should both be options. This is especially important in sets containing units such as Plasmafier, Plexo Cell or Resophore.

In these openings, 1 represents Trinity Drone. (This makes sense if you assume Trinity Drone is the first unit in the random tab.)

Player 2 usually opens with a natural Conduit (DD/DDC), with tons of great follow-ups. Some possibilities are:

Player 1 has way more options on how to play, similarly to how player 2 has more options in Vivid Drone sets. This gives player 1 a considerable amount of control over the direction that the game ultimately takes, but ample opportunity to make bad decisions that can be brutally punished. Assuming there are no other economic units and player 1 wants at least one Trinity Drone, player 1 will usually open with one of:

Of these, DD/DC is the best in many sets because of how flexible it is. Possible follow-ups to this line include:

Turn 2 DC is very flexible for player 1 because of a specific transposition that often occurs in Trinity Drone openings. Here a transposition means a reordering of the choices made during a build order such that a similar or identical final position is reached. In chess, a transposition might simply be choosing the move order [Nf3, Bc4] instead of the move order [Bc4, Nf3]. In Prismata, transpositions are more subtle (since you don’t just make a single move during a turn), but have similar strategic and tactical importance.

The most important transposition that comes up in Trinity Drone openings is the following, which which is referred to here as “The Trinity Transposition“:

As an example, buying [DD/DC/1DB] results in a very similar position to that of buying [DD/DD/DCB]. The only difference is that the second option leaves you with 3 Drones instead of a Trinity Drone, and a difference in the remaining supply of the relevant units.

An important thing to realize with this and other transpositions is that there is tremendous tactical and strategic relevance to which move order you choose. Here’s a list of why the choice might matter:

Why [D, followed by C] can be better:

Why [C, followed by Trinity Drone] can be better:

As a rule of thumb, going [C, followed by Trinity Drone] is often better, especially if a breach-proof strategy is even remotely a possibility. The Drone-first option is only worth considering if you’re also considering skipping green (or Trinity Drones) altogether. But if you definitely want Trinity Drones, then you usually should be going for the Conduit early.

In particular, this means that DD/DD/DDC, DD/DD/DCC, DD/DD/DBC, and DD/DD/CA are often suboptimal openings for player 1 in Trinity Drone sets. Instead, consider opening DD/DC during the first two turns for greater option value on turn 3—you can threaten a Gauss Cannon, go breach-proof more easily, and choose to save the green, all while leaving the option open for a super low-econ 9-Drone rush. In many cases, you also get to choose whether you’d like to have an extra gold or an extra green on turn 4.

An additional note: you can apply the Trinity Transposition multiple times to drastically alter openings.

With one application of the transposition, this is largely equivalent to:

The lesson here is clear: a turn 4 Conduit opening can be converted to a turn 2 Conduit opening while largely leaving the result unchanged. The key difference is that player 1 will have more Trinity Drones, and will be afforded a completely different set of options if they decide to diverge from the plan. In many situations, the availability of those additional options is beneficial to player 1’s overall game plan, and may even force player 2 to play more carefully (for example, to avoid losing to a tech switch or a Tia Thurnax all-in).

This section contains advice about when to use each of the player 1 openings listed above.

This is pretty much only a good opening when you’re not going to get Trinity Drones at all, or when you want to keep your Drones alive for a unit like Resophore or Savior. DD/DC is almost always better. If your plan is to go DD/DD/DDC, then you should probably just open DD/DC as player 1 in Trinity Drone sets unless you have a very specific reason not to. Of course, if you’re planning on playing DDB or DDA on your third turn (or want to leave that option open), then DD/DD is a reasonable option.

This remains the strongest option for player 1 in most heavy econ sets. Though it’s certainly possible to go for builds like DD/CC/D11/DD11 (Outdated, Trinity Drone costs Energy), the result isn’t often any better than a typical DD/DDE opener.

To see why, observe the following: DD/CC/D11/DD11 yields a result that is economically identical to the “impossible” build DD/DD/DDD/DDCC (impossible because you can't build a third Drone on turn 3 without getting an extra Engineer on turn 2). However, you often don’t want a double Conduit in big econ sets, especially if you lack Drones to turn into Forcefields because they’ve all been Trinitied. It’s often preferable to go for DD/DDE/DDD, and then choose a different continuation over a double Conduit. The tradeoff? Fewer Trinity Drones (so a more difficult transition to breach-proof later in the game), plus you’ve got 2 fewer gold to spend on turn 4 (because you’ve already spent it on an extra Engineer). But in situations where you don’t want two Conduits, you’re usually much better off.

Note that you can still incorporate Trinity Drone in your big econ games by going DD/DDE/DDD/DDDC and then mixing in Trinity Drones during the subsequent turns. However, by making some very careful observations, you can see that this is often dominated by other opening choices. Applying the transposition, this is largely equivalent to:

DD/DDE/DDC/DDD1. This is nonsense though, since you can't drone 4 times in Turn 4.

Are you seeing a pattern yet? A lot of player 1 Trinity Drone openings are transposition-equivalent to openings that start with DD/DC.

As mentioned above, this line is very common, with possible follow-ups including:

The most important is the third one, DD/DC/DD1, which leads into a 4th turn with 12 Drones worth of income, 2 stored gold, and a single Conduit. There are several excellent follow-ups available, including DD1B, DD1A, and DAB depending on which techs you want to pursue (DAB can also be swapped for 1AB if you need an extra gold on the following turn and are willing to pay a green for it).

The DD1A and DD1B follow-ups (to a turn 3 DD1) are not transposition-equivalent to any build orders available in the base set alone. Their equivalent builds would be the “illegal” builds DD/DD/DDD/DDCB and DD/DD/DDD/DDCA that are impossible due to lacking a third Engineer. They are excellent follow-ups and you should be thinking about them frequently when playing Trinity Drone as player 1.

This one should be reserved for special occasions like breach-proof all-ins, Cryo Ray sets, Cluster Bolt sets, or other situations where having tons of green is a good thing and getting a lot of Trinity Drones is very important.. If you want to convert all your Drones to Trinity Drones as fast as possible (perhaps because you plan on skipping defense altogether), then this is the way to go.

Note that DD/CC/D11 is transposition-equivalent to DD/DC/D1, and even the wildly crazy DD/CC/11C has an equivalent build in DD/DC/1CC. Consequently, if you think you might want to get 2 or 3 Conduits but are unsure, you can always open DD/DC and delay the decision until your third turn. However, your opponent’s response may not give you much help in making up your mind (more often than not, they’re just going to open the fairly neutral DD/DDC).

The key lesson is the following: everything DD/CC does, DD/DC also does, except with one less Trinity Drone and three more Drones instead. It’s pretty safe to only consider DD/CC if a core part of your game plan involves converting Drones to Trinity Drones quickly.