From Prismata Wiki
Jump to: navigation, search
This article is a stub. You can help Prismata Wiki by expanding it.
Thunderhead 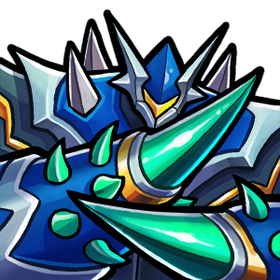 Thunderhead is a Green-blue unit.

With 4 attack and an astounding 11 defense, Thunderhead is easily one of the strongest units in the game. However, it's lifespan and frontline attributes make it vulnerable to chill, burst damage, and especially absorb denial. Even if these aren't in the Random Set, Thunderhead must be bought at the right time to maximize its value. Buy it too early, and it won't absorb as much damage as it could. Buy it too late, and the opponent will destroy it early. A well-timed Thunderhead can absorb 18-21 damage and deal 8 damage, more than making up for its cost.

It's worth noting that in some mid-late game situations, buying Thunderhead is worthwhile even if it's killed immediately. A guaranteed 4 damage and 11 soak for 15

attackers to gain value, this unit can quickly counter it while opponent is stalled on paying for defense.

A good point to have it

bought is when the Opponent has 5-7 constant

Attack, since it will be near the full Attack value that Thunderhead can soak by the turn it

dies. User should be over enemy

Builds based on heavy

Economy are weakest to Thunderhead, since they can't commit to defense efficiently or add

value back. However, the

pressure of such a set may impede getting it cleanly, or at all.

If you buy a Thunderhead followed by a Redeemer, the Redeemer's Gauss Charges arrive right before Thunderhead's lifespan runs out.

Units that can create a burst of attack for a low cost are a threat to Thunderhead. Such units include Gaussite Symbiote, Grenade Mech, The Wincer, Tia Thurnax, and Venge Cannon.

Arka Sodara, Bloodrager, Lancetooth, Mega Drone, and Thermite Core all deny absorb, which is where Thunderhead gets most of its value.