(Fragile: does not heal)
At the start of your turn, gain 5 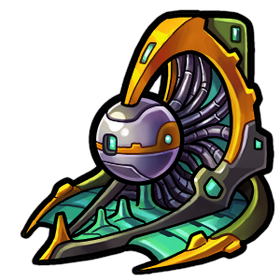 Thorium Dynamo is a Colorless unit.

Thorium Dynamo is an extremely strong economic unit which can almost never be ignored in a set. Because of its click ability, it is viable to get even in sets without

units, since the excess

can at least be converted to

(albeit inefficiently). Thorium Dynamo is also a strong enabler of breachproof strategies, since it is not difficult to convert almost all of your Drones into Thorium Dynamos.

If you are buying Thorium Dynamos for value but are not going breachproof, you will want 1 to 3 Dynamos depending on how much economy you want before you start full attack production. Even with the faster economy start that Thorium Dynamo provides, with good defense in the set to discourage breachproof you don't always want to wait for 20 income before the switch. The sweet spot if you don't want many Green units is 3 Dynamos, giving you the option to click a Thorium Dynamo every turn without floating.

If you are going breachproof, you want to get 4 Dynamos if possible, because the best defense for your Thorium Dynamo is having more of them. Against aggressive openings, however, it is often better to only make 2-3 Dynamos because your Drones and Engineers can't be defended long enough to assemble the last one and you also need to put the pressure on earlier, so you should avoid overdroning.

Knowing this, an option for the breachproof player is to let their first Thorium Dynamo get damaged, but suddenly switch gear to a non-breachproof strategy by starting to absorb. This "fake breachproof" strategy lets you absorb damage on a Thorium Dynamo that will keep value the whole game with without actually being finished off. This is very telegraphed by the buying of the Blastforge. If the opponent can see it coming, they can instead get value by killing off something else (like a Gauss Cannon) or ensure the destruction of the Thorium Dynamo by creating too much pressure for 1 turn of defense via threat or chill.

With Thorium Dynamo in play, Conduits can be bought for a similar value as a Drone, as they provide one

which can be turned to

. However, this is very inefficient as you would basically never want to buy a Drone for 4

You can think about Thorium Dynamo by comparing it to purchasing an equivalent amount of Drones and Conduits. Suppose you have six Drones and two Engineers. The following sequences result in identical economic outcomes:

However, the Thorium Dynamo is buyable even if you only have 5

to play DD/C. This may free up

to produce more Drones simultaneously. This provides a significant economic advantage in scenarios where you would otherwise have had to e.g. buy a single Drone and bank 2

Both player 1 and player 2 have very efficient Thorium Dynamo openings that can be followed up easily with any tech.

Both players also have builds to get a high economy going while delaying their third Engineer, without committing to more than one green:

Player 1 (starts with the line above):