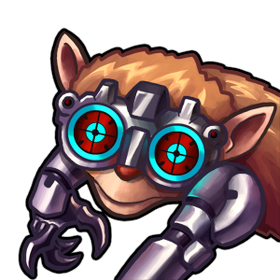 2 build time. It's part of the base set.

red's basic attacker. It is the most efficient constant

damage source from the base set, but takes

2 build time, you do not need to buy a Blastforge preemptively in order to block the first two Tarsiers with a Wall; you can just buy it right after the opponent buys Tarsiers and your Wall will still be ready in time.

Another consequence of the Tarsiers'

2 build time is that they are worse later in the game. They are great attackers to start with but in the mid-to-late game Rhinos may be a better use of your

since they attack immediately while Tarsiers take two turns to even do anything at all.

If possible, try to take advantage of the Tarsiers'

2 to deny your opponent the ability to absorb. For example, if you already bought one

attacker and your opponent responded with an Infusion Grid, buying Tarsiers and no other

attack would have just been absorbed anyway, so it's like the Tarsiers didn't really have

Tarsiers must be protected from breaches at mostly any cost, as their

1 Health will let your opponent wipe them out very easily. That makes them a risky proposition against opponents with access to

Tarsiers of course combo as a force multiplier with the Amporilla.