From Prismata Wiki
Jump to: navigation, search
Steelforge
Colorless unit
(see more)
As an additional cost to buy Steelforge, consume a Blastforge.
At the start of your turn, gain

, and consume a Drone: construct a Steelsplitter
[data page] 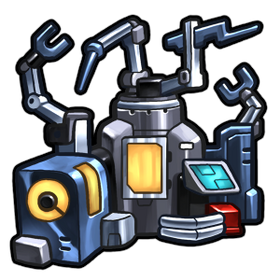 Steelforge is a Colorless unit that produces two

blue. It also has the

Ability to convert Drones into Steelsplitters.

The Steelforge is a colorless unit that requires the player to sacrifice a Blastforge to be built. Its

4 health it can not be targeted by the Apollo's

Ability (or Kinetic Driver's for that matter), so building Steelforge can save your

blue production from being sniped at a critical moment.

Buying Steelforge instead of a second Blastforge is virtually always correct unless there are Blastforge-synergy units such as Drake or Grenade Mech as it's essentially just a 1-gold cheaper Blastforge even without its ability.

When you use the Steelforge's

Ability you should not buy new Drones to replace the converted ones as they won't have time to pay for themselves, so you should rather invest your Resources to buy more

Note that if the Random set contains more Drone consuming units like Plasmafier, you should be careful about combining them as they may reduce your Drone count down fast.