(Frontline: can be attacked directly) 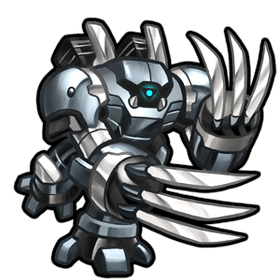 Shredder is a Blue unit, useful primarily for mid/late game

Attack, and cheaper than Wall while providing more

attack threat. Its only downside is its

Frontline property, which makes it easy to pick off for your opponent.

Shredder is mostly built in the mid to late game as preventive defense, being far more efficient at defense than Walls as long as your opponent can't make you lose absorb by picking them off. The additional damage threat they offer will also play to your advantage, even if you don't use your Shredders offensively, by forcing your opponent to defend against it.

constant attack and you have to buy defense, or else breach you and slaughter your economy if you refuse to either buy Walls or block with some of your Shredders. However, in combination with Wild Drone in a full Frontline strategy, rushing Shredders can be rather difficult to beat: Shredder's

4 combined with its cheap cost can put out a lot of attack fast, and if most of your economy is made of Wild Drones, your opponent will have basically no weak points to target when they eventually breach. Here are are example build orders for both players using Wild Drones and Shredders in conjunction:

Those builds allow to start pumping out two Shredders per turn from turn 4, creating a lot of durable pressure very early.