, and construct an Engineer
[data page] 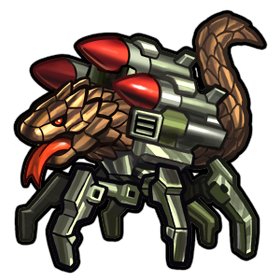 Sentinel is a defensive Green-red unit with

Sentinel excels at providing mid-range defense capabilities, with a little

attack to put pressure back. For the cost of 6

across three turns, and the delayed

3. While a bit low-impact, few other units can match that level of defensive and offensive efficiency. Sentinel's ability is equivalent to a Grimbotch (Without the 4th turn threat) and 2 Doomed Drones to outsource buying Engineers to. The final turn gets 1 less soak overall, without the Lifespan weakness. Note that, if better soak and stronger

options are in the set, it is efficient to have only 1 Sentinel active at any time, for granularity.

Sentinels excel at providing players with defensive granularity, that is, the ability to efficiently absorb varying amounts of incoming Attack. They also work very well with strategies that might require a large amount of

energy or Engineers, such as strategies making heavy use of Electrovores or Tesla Coils. It also has excellent synergy with Galvani Drone. As such, Sentinel is currently the only unit with Stamina with which one might want to attack even though the Attack will be absorbed, simply to get the engineer. Players should avoid this situation by not having Sentinel be one of their first attackers but rather investing in a round of Tarsiers or such first, in order to avoid losing the damage to a simple Wall.