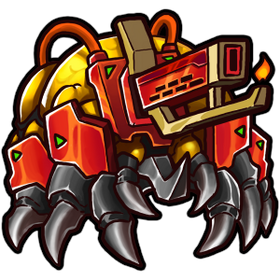 Scorchilla is an aggressive unit that deals a lot of

damage, but with a long (

3) Build time and cooldown through

3 Exhaust. It can be used two common ways as a primary (synchronized) attacker: either alongside other attackers such as Tarsiers to merely increase breach pressure on the on turns, or to go the full mile and buy only synced Scorchillas so as to deny 67% of absorb. Either way, a burst from enough synchronized Scorchillas can be all but impossible to defend against without efficient random set soak such as Polywall.

Scorchilla's efficacy comes from being a

3 attacker, but with 2 extra attack being upfront, which cuts opponent's tempo, roughly matching the extra cost over a

3 constant attacker, that being about 3.5 in

. The attack being Click then gives a large advantage early, and against

The problem with going full-synced Scorchillas (ie. deny absorb by having no other attack) is that this makes it innefficient to buy Scorchillas every turn, as two-thirds of them will have to wait 1-2 turns before attacking. So how do you fix that problem? The answers comes through other units in the set. Combos are listed below.

In low and mid-econ Scorchilla sets, the following opening is very common for Player 2:

You can spend your red on 2 Tarsiers the turn after, preventing your opponent from getting any absorb until the first Scorchilla hit.

This, however, avoids the Absorb denial. A better play can be buying 2 Scorchillas the turn after, holding 1st pair to block on one's Fragile body.

This produces a large Attack burst.

This produces a burst of 23+ Attack if unimpeded. Player 1 will lose if going for Turn 4 Scorchillas. Perforator improves the opening, Protoplasm wrecks it.

Needs an Absorb and Defense enabler, such as Perforator.

Needs a Red sink, such as Perforator, Gauss Charge.