2 (Stamina 2: can only be clicked twice) 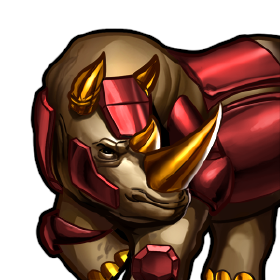 Rhino is a defensive Red unit with potential for counterattack. It's part of the base set.

Rhino is the red resource basic blocker unit. It features a somewhat poor amount of

blocking given its cost of 5

given enough foresight. However, Rhino can absorb 1 point of

prompt, allowing a player to use their

Rhino is unique among the basic defenders in that it also has some limited firepower. Since it has

2 Stamina, it can only attack twice before it is depleted (at which point you can safely discard it on defense).

2). Therefore, you should try to set up a Rhino train, in which you buy Rhinos continuously over multiple turns, attacking twice before defending with the used up body.

If you are not using any larger absorbers, you can also absorb for one on the Rhino the turn you buy it, since it is prompt. This effect, when used for such train, is like setting 2

a turn for having a

If you manage to keep attacking with the older Rhinos without losing the new ones (for instance covering for them with Forcefields), after 3 turns you get in a situation where the older Rhinos 'cover' the new ones until they are done attacking, giving you maximum value on all of them. Knowing the right time to start this train can be tricky. Too early in the game, and it would be better to get a long term attacker, such as a Tarsier, but if you wait too long you will need to sacrifice the Rhinos on defense before they can attack.

Rhinos can also be good value against threatened damage that your opponent doesn't actually want to use. For example, Drake threatens 2 extra damage by sacrificing a Blastforge, which isn't a great value for the Blastforge. If you defend the two extra points with a Rhino and your opponent clicks the Drake, then you caused them to use an ability that wasn't actually good value, and if they don't click the Drake, then your Rhino just attacks the next turn and you got away with delaying the need to buy 2 real defense for one turn (and can probably delay it again in the same manner).

Note that the estimated attack value shown during your turn also includes the Rhinos that are currently blocking. If your opponent has to sacrifice Rhinos in defense, they won't be attacking. The same advice also applies to other blockers that can be used to attack, such as Steelsplitters.

When you have a

1 stamina Rhino and a

1 stamina Rhino, your threatened damage goes down by one sooner, but in return you will have a stamina-less Rhino available to block sooner. Thus attacking with the

1 stamina Rhino is the more defensive play; attacking with the