for each Forcefield you have.
[data page] 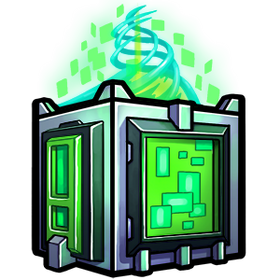 and a Drone each. If the Drone is re-bought immediately after consuming, the Forcefield effectively cost 4

, putting it on par with many of the cheap red attacking units such as Electrovore and Tarsier, with the added benefits of being able to block while producing attack and being

Prompt, as well as having the option of not rebuilding the Drone consumed, significantly reducing its cost in exchange for losing gold income for future turns. This also means that it synergizes with cheaper Drones. Additionally, as

Green can easily be stored, many Forcefields can easily be bought right as the Resophore is about to finish construction for a rapid and large increase in damage, albeit at the cost of a large portion of one's economy. This is

Note that due to its lengthy

Buildtime, Resophore should generally be bought somewhat early on--if bought too late, there's a large chance that the game will be decided before it's done building. Its low cost typically permits doing just that. However, if players can rapidly rush to large amounts of attack and pressure instead, Resophore might still be too slow.

If buying resophore, units that consume Drones, such as Plasmafier, Trinity Drone and The Wincer, may be less useful than normal as they limit the amount of Forcefields one can buy due to reducing the amount of Drones available. Conversely, if planning to use such units, Resophore is likely not be worth purchasing.

To understand what types of sets Resophore is good in, consider the following reasoning: Resophore consumes your Drones, and is thus more valuable when Drones are less valuable. Drones produce gold, which is more valuable when there are more efficient units you can buy with it. Thus, efficient soak units like Polywall and Plexo Cell make Resophore weaker (Though it's more of an advantage to face Attack, while not forcing Soak itself), as do efficient, aggressive attackers such as Shadowfang and Tantalum Ray. Large absorbers, however, make it stronger as they make the midgame longer, giving Resophore more time to build and pay off.

As it essentially turns your Forcefields into Borehole Patrollers, Resophore is also a mild counter to

chill-massing strategies such as Endotherm Kit.

Resophore has 5 build time, yet its effect starts being relevant from 2 turns before going active. The turn before, a Green means an extra Forcefield, which turns a Drone, worth about 2.5 gold, into an Attacker, worth 6.5 gold, making a gain of 4 minus the 1G cost. Therefore, buying a Conduit before that turn means an econ gain of roughly 8 gold (Slightly better than buying 3 Drones). This does not include the difficulty of tech balancing on a decreasing economy, though. An ideal amount for conversion is 2 or 3 Green per turn in order to be able to spend other Tech regularly. This ramp represents a fair Econ gain, but this alone lacks the advantage of having it built. Storing a large amount of Green for that turn is most important, as it prevents a forced Forcefield all-in over several turns to get to cash on the Unit.

Placing it early but conveniently is important. Player 1 may set from Natural Animus.