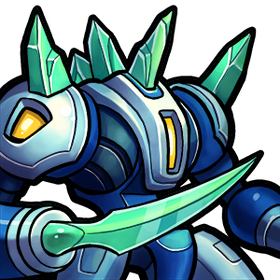 Redeemer is a heavy

blocker Green-blue unit. It has the downside to build Gauss Charges for your opponent.

Redeemer is at its best when used to rush down an opponent going for a greedy and defensive strategy that prevents them from pressuring you for a while, such as Savior or Zemora Voidbringer. In these situations, the incoming Gauss Charges will hurt a lot less since the opponent has little to no attack to back them up. If you manage to even partially absorb the Charges, even better.

Redeemer is also a good buy if you can soak the Gauss Charges with an efficient defender like Plexo Cell or Aegis, or late in the game when the Gauss Charges will arrive too late to make a difference. (Note though, by that point, buying Attackers is not that good either. Attacking for 2 turns being worth about 9

, it may be net value still as the enemy must

Redeemer is a risky purchase if the opponent has access to units such as Grenade Mech or Nivo Charge, as you will already be hard-pressed for defense on the Gauss Charge turn, making an additional burst of sudden pressure even more devastating. Opponent may also exploit the charges effect by means of

attack consuming units, most notably Arka Sodara, since it can go

tech more easily to perform such counter. The user can use the effect fo its own advantage instead though, by setting to get Arka right before the enemy charges hit, ensuring no counter denial.

Can combo well with non-prompt sources of defense such as Shredder, as these allow you to efficiently soak the Gauss Charges starting the turn before, spreading out the impact a bit (which is helpful since you can only buy so much prompt defense in one turn before you have to turn to inefficient sources like holding back Drones).

It can be considered a 10

2x Attacker with an extra effect: Get an extra

defense in 2 turns. Often this may be slightly negative, but the resource cost means it can add pressure efficiently. Having only Wall as efficient soak, the first 2 extra

attack can be taken as pay for 3 of the Charges, then getting a Wall for the other 3 ties for having the extra

The following rush is common for Player 2 in Redeemer sets:

Rushing out a Redeemer like this puts 3 constant damage out fairly early, which can be quite annoying for an opponent who does not have a Blastforge yet and thus cannot get good absorb.

Player 2 has a much easier position for this, since it can buy exactly to open with Redeemer but then exploit natural Infusion Grid and delay their defense 1 turn.

Player 1 may use Doomed Drone (1) for a rush build. They also Soak the charges.

Most aggressive Rush for Player 2 with Doomed Drone (1). This has the effect of locking the opponent from getting

attackers back. Galvani Drone also works, though a lot weaker.

Rush of Player 2 with Borehole Patroller (1). Urban Sentry works much like it, but does not prevent opponent's Sentry.

The variant (Turn 3 and 4 swap) is not recommended, unless Urban Sentry is the extra unit and opponent is without preparation.

Player 1 may rush with a Shredder (1) if Doomed Drone (0) is present. This blocks opponent's Redeemer.

Player 2 has an exact Thorium Dynamo (1) and Doomed Drone (0) opening.

Player 1 may rush with Centurion if Auric Impulse (0) is present. This absorbs the Gauss Charges.

Redeemer has been through a large number of significant nerfs, buffs, and reworkings because many versions of it have been extremely player-advantaged with very sharp openings. This video goes through the history of Redeemer and the reasoning behind the changes.