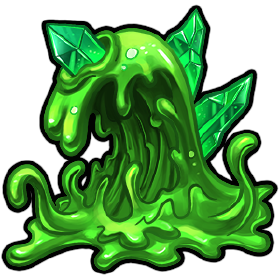 PROTOPLASM is a powerful burst 4-damage

attacker that can act as a

4 hp defender instead if necessary. Oh, and it's ALSO PROMPT. [1]

The main strength of Protoplasm is counterattacking: it lets players absorb

Prompt while allowing them to produce an additional

4 on the same turn, which translates to huge Breach potential in games with low economies.

While it doesn't actually Absorb, continuous use gives a similar defense, and continuous Attack as well. It can be thus compared to an unit that turns part of the user's economy (Plus the base cost) into an

Attackers. Since its cost equals the production of 7 Drones, 2 Conduits and an Animus (Though consuming units is a large advantage), costing total 35

, and efficient Attack is around 6.5 in

, the portion of the cost left for the Absorber component is about 9

plus its base cost, at worst. This may not seem good, but at higher inflation the immediate Attack is more critical while Drones lose worth, and Protoplasm delivers it as needed.

There's also a simpler comparison as well. Having a Doomed Wall grants Absorb, while additional ones in later turns would not. Buying 1 per turn while soaking on the previous one means 3 Absorb (Recover next turn) then 4 Soak, each turn. Protoplasm, for a similar cost and use, means 3 Soak then 4 Attack (Gain next turn). With

Attack being worth more than

Block ussually, it stands as an efficient unit in such cases.

When to use Protoplasm[edit | edit source]

Protoplasm is often considered one of the most situational units of the game, somewhat comparable to Tia Thurnax in that in some setups against an unprepared opponent a well-timed Protoplasm will almost win a game on its own. The conditions to meet are fairly strict though:

To sum things up, the case in which Protoplasm will look best is against an opponent trying to execute a red rush on a low economy (like any of the Shadowfang rushes). In most other situations it will probably lose to better absorb and defense from blue units such as Doomed Wall (if the only blue defense is Wall then Protoplasm is probably still good).

A seemingly interesting strategy when considering Protoplasm would be to use it to block and not sacrifice it immediately after, continuing to buy other Protoplasms and increase the Breach potential. While this can be successful in precise cases because of the offensive finesse provided (for instance if the opponent tries to defend using Barriers or Plexo Cells), it generally won't accomplish much, for the same reason stacking Pixies is generally not a valid strategy: all your opponent has to do is keep buying the same amount of static defense every turn, and when you eventually decide to use your Protoplasm stack it will end up doing the thing as if you instead sacrificed them one by one.