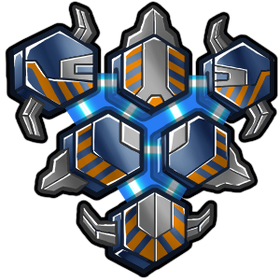 Polywall is a Blue

Polywall is tech efficient; it provides as much

defense as 2 Walls for only one

Frontline mechanism, however, is the drawback to this efficiency.

In the early game, Polywall can absorb all the incoming damage as long as your opponent doesn't have

6 attack. When this point is reached though, your opponent will be able to destroy it by simply

clicking it because of its

In the late game, Polywalls can be used to defend efficiently if your opponent is attacking for an amount just shy of a multiple of 6; attacks for

5 damage on your last Polywall. If your opponent's attack is equal to or only one greater than a multiple of six, he will

click your Polywalls to destroy them, leaving no or close to no damage to absorb for your final

Polywall can also be built to save a better absorber by dying in defense, just like you would use standard Walls.

Polywall has the curious effect of actually making multiple Blastforges worse in the set despite being a blue unit. This is because it takes 10

to efficiently spend one

on defense in a Polylwall set, so if you have 2 or more Blastforges, you won't be able to spend both of the

blues on Poylwalls unless you have 20 or more Drones. Even if you do, this leaves you with no gold to spend the rest of your tech.

Beware of units that provide Offensive finesse (e.g. Pixie, Auride Core), as these allow your opponent to attack for exactly 6 or 12