, and consume a Drone: gain 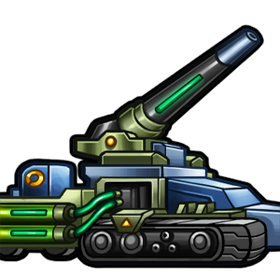 attack by consuming Drones. It is part of Antares.

Plasmafier is a very strong

clickable attacker, able to instantly put a lot of pressure on your opponent with its

4. However it consumes a Drone every time it fires, hurting your income.

In a nutshell, Plasmafier is surprisingly comparable to a slower Tia Thurnax: it is a very all-in investment that will cause you and your opponent to crumble fast, and the trick to mastering it is determining the right turn to afford it. Usually Plasmafier is most effective if bought just before the game reaches the point where you can no longer buy attackers and have to spend all your resources on defense.

While it may seem tempting to constantly replace the Drones consumed by Plasmafier attacks, it is usually not correct to do so unless you are actually running out of Drones to consume. Instead, Plasmafier should be followed with additional pressure such as Nivo Charges to make your opponent crumble even faster.

Since Plasmafier is a high-pressure unit, the ideal set for it is one lacking efficient soak, because pressure is worse when the opponent is able to defend efficiently. It also gets better if there are other good attackers in the set (eg. Tantalum Ray, Hellhound). To understand why, consider this: Plasmafier forces your opponent to buy 4

defense per turn. This means a certain amount of their resources must be spent on that each turn, which prevents them from buying as many attackers. Obviously, this is most useful when the attackers that they would've bought instead of defense are very efficient.

clicked on mostly every turn, in some cases it might not be worth: typically, if your opponent has units with

Lifespan left on defense on their last turn, Plasmafier's damage might go to waste completely. Always try to calculate what your Plasmafier's damage is going to kill in your opponent's defense. If it is not worth more than the drone that you would sacrifice, you should probably refrain from attacking with it.

Plasmafier is also able to

4 health, making it untargettable for Apollo.

Beware of using special drones like Vivid Drones or Trinity Drones if you want to get Plasmafier, as reducing your base Drone count might come back to hurt you. Also beware of using Plasmafier in a set with Deadeye Operative as your opponent may be able to simply snipe all your Drones away and prevent your Plasmafiers from shooting.