unit
(see more)
As an additional cost to buy Ossified Drone, consume a Drone.
At the start of your turn, gain 1

, and consume a Drone: construct an Ossified Drone
[data page] 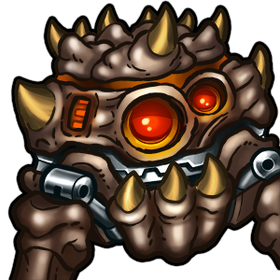 Ossified Drone is a legendary Red unit with

Ossified Drone is a one-supply legendary unit that gives the

red. In doing so you gain an additional point of

Health and the ability to

gold as you do not need to click them (unlike base Drones that need to be harvested).

Ossified Drone's low cost makes it easy to integrate early in your build, getting lesser Absorb and budget for Tech or an extra Drone. If you find yourself with 2

leftover at the end of your turn, you can invest in the first one, and from that point on it will act as an efficient sink for any

red that would otherwise be wasted.

The best use of Ossified Drone is against threat that the opponent doesn't want to follow through on, such as Frostbite or Drake, as it will augment your defense while still producing gold each turn, much like Xeno Guardian and its attack. If you already own some Ossified Drone your opponent will have to build a lot more threatened

chill before you have to actively defend against it, especially since you should continue to produce Ossified Drones each turn in this kind of game.

The soak Value of the Ability is considerable. Creating an Ossified Drone costs

and a Drone, worth 3

soak next turn. It however, produces 1

back as well, making the top soak cost slightly over 2

, which is very good. Using it this way implies an Ossified Drone is held off from soaking for a constant click, so the 1st one basically is paying for its own cost.

Another situation[1] is the one described by Will Ma. If you have Rhinos, you want them to attack before dying and you can let them do so if you have Ossified Drone to make it up for your defense.

As Ossified Drone is a legendary unit that can only be purchased once, you never want to lose the last Ossified Drone you have on the field if you plan to convert more base Drones in the future.

You should also be careful about using Ossified Drone together with other units consuming Drones, as you could end up reducing your base Drone count faster than you'd want.

This provides 2 Attack early and allows defending in low tech.

This adds great Defense but is somewhat slow for Attack. Forces a Drone hold at Turn 5.

This provides 2 Attack early and allows defending in low tech.