, and consume a Steelsplitter: gain 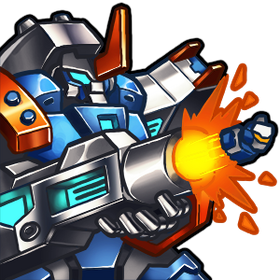 Odin is a high-pressure legendary blue unit. It has a large amount of

Attack damage but consumes a Steelsplitter to deal that damage.

As the unit with the highest gold cost in the game, Odin requires a high economy. On the turn you purchase Odin, you will unlikely be able to buy anything else. As compensation for the cost, Odin immediately threatens

7 Attack when bought--an amount of pressure only matched by the mighty Tia Thurnax, and sometimes Vai Mauronax. The high tempo of buying Odin will usually give you time to assemble more attackers while your opponent scrambles for defense.

If there are few other

Blue Units in the Random set, it is generally ill-advised to tech for the Odin, since the

is likely to be wasted on future turns.

Deciding whether to use Odin's

Ability can be tricky. By sacrificing a Steelsplitter, which costs 6

4, which would cause the other player to lose at least a Wall and a (preemptive) Engineer in defense, which add up to over 7

. This trade by itself is favorable, but this avoids Blocking with the unit. Cases where clicking it would allow the user to breach and thus deal significant damage, or set up for such in a few more uses, are the strongest case for the ability. Breaching enemy Absorb is nearly always a good trade by itself.

Odin has two main types of combos: tech fixes that mitigate the drawback of committing to 3 Blastforges, and blue pressure units that can be bought after Odin to put even more hurt on your opponent.

Another combo is Lancetooth, since it allows you to spend away the attack from your Steelsplitters instead of letting it get absorbed. This makes rushing Odin quickly very attractive, since generally speaking the reason not to rush attack quickly is absorb, which Lancetooth counters.

Both players have some possible openings with which to rush out Odin. The fastest possible build is available to Player 2:

This build is terrible however, and should lose easily provided Player 1 doesn't play right into it. Player 1 should not set up to the Odin right after this, because once Player 2 gets Odin they will be forced to either delay their own for a while or get breached buying it. However, Player 1 should have no trouble beating the build if they go for a slower Odin, since Player 2 will be dreadfully overteched in the coming turns and Player 1 will not.

The fastest reasonable build is available to Player 1:

This build should be much tougher to beat since it leaves Player 1 far less overteched than the previous build left Player 2, and puts Player 2 in the same predicament (either delay Odin for a while or get breached buying it).

A slower build is available to Player 2:

Having to buy a Conduit early on is unfortunate, but player 2 often has no choice - floating 4 gold for two turns in a row is just so bad. However, most base + 8 sets have some green units that will be good at some point, so it isn't necessarily the end of the world.

There is also an even slower build, for Player 1:

Player 2 has a strong econ build:

Blocks for the turn the enemy Odin would deploy, then deploy back immediately against pressure.

Player 1 can open Turn 5 with Auric Impulse (1) and a blue sink. This requires a way to add 2 attackers per turn quickly to be effective. Thermite Core or Pixie can help focusing on raising the

economy the turn after.

It can be strong worth with Red and Blue support.

Efficient rush, but may go second.

This requires a strong support from the unit set.

This requires strong support from the unit set.

This pressures the opponent but leaves a 6B econ.