5 (Chill 5: add 5 chill to target until next turn. Units with chill greater than or equal to their health cannot block.)
[data page] 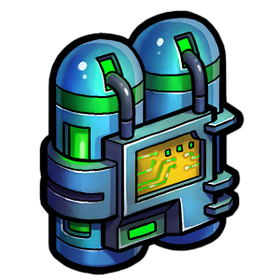 Chill for a single turn.

Nivo Charge gives you a lot of

freezing power on short notice, but has to be timed well as it has

Many chill units (eg. Frostbite) get value by forcing the opponent to buy additional defense to prevent a breach and then simply sticking around instead of sacrificing themselves so that your opponent can never catch up on the lost defensive tempo. Nivo Charge is different, as its

1 lifespan means that as soon as the opponent has defended against it so that you can't breach them Nivo Charge will simply expire and the defense the opponent build against it will still be there, so they can immediately cache in on the lost tempo. This means the main use of Nivo Charge is to force out inefficient defense by putting on so much pressure at once that the opponent has to turn to desperation sources. For example, if you buy multiple Nivo Charges at once when your opponent is already under a lot of pressure, they may have to buy Rhinos for prompt soak, hold back Drones, or even sacrifice attackers such as Steelsplitter in order to defend. The challenge in using Nivo Charge effectively is in knowing when the inefficiency of the defense it forces out is worth more than 2

. Nivo Charge therefore has synergy with other high-pressure/burst units such as Scorchilla, Iso Kronus, The Wincer, and many others.

Of course, Nivo Charge is also well-suited to getting value by freezing your opponent's biggest absorber - if they have a Xeno Guardian, for example, Nivo can deny 1 absorb by freezing it and forcing them to absorb on a Wall instead. This value is in addition to forcing out 4 defense that they otherwise could have bought later or obtained using more efficient units.