From Prismata Wiki
Jump to: navigation, search
This article is a stub. You can help Prismata Wiki by expanding it.
Nitrocybe 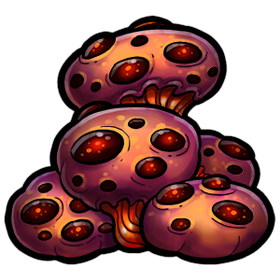 Nitrocybe is a Red unit.

Nitrocybe's high tech-to-gold ratio makes it useful as a red sink, and is thus strong in combination with units like Lucina Spinos, Shadowfang, and Tatsu Nullifier (as they can often leave you overteched after buying them).

Generally the best way to use Nitrocybes is to keep them on defense instead of clicking them. The reason is that by not attacking this turn you threaten to attack next turn instead, so you aren't actually reducing the pressure on your opponent by not clicking them. You've effectively already dealt the one damage by forcing the opponent to defend against it. However, by holding the Nitrocybes back you retain the option to convert that one attack into one defense if needed. They also provide Defensive granularity if held back. However, it can be correct to click them if the extra damage kills something important, even if it's not a breach (such as a Rhino, or the last Engineer so that you can exploit them next turn).