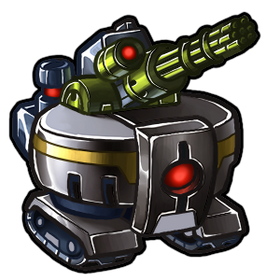 Militia is an offensive Blue unit which can produce either 1

Militia can provide you with either

ability, giving you a measure of flexible attack. This makes it a good buy as a first attacker, since it will leave your opponent with two bad options: either lose an Engineer, or buy a Wall or other absorber that will not be immediately useful as you will then just take the

Militia is similar to Steelsplitter in cost and

damage, but lacks its

Block ability. As such it can be thought of mostly as fulfilling the same role, a support unit not efficient enough to be the backbone of your offense by itself.

Having a couple of Militias available in the late game can help you take advantage of larger gaps in your opponent's defensive granularity, allowing you to reduce your

damage output with benefit when it would just be absorbed anyway.

health for its value, meaning it can be used as a breachproof attacker.

Militia's ability is strictly inferior to Auride Core's, but the Core by itself doesn't provide

Generally speaking, Militia should not be rushed; although it is good as a first attacker, it is still quite expensive for a single point of attack, and once you are over the absorb barrier you have the problem of being teched into an early Blastforge that will continue to buy inefficient attackers. Nevertheless, the openings below can be useful in some niche cases, such as games featuring Lancetooth or Drake.

This opening, available to player 2, lets you produce Militia and 2 Drones every turn from the 4th turn onward. As it is your first attacker you will likely force

prompt defense, which will let you use its

ability to your advantage.

turn earlier but with one less Drone: