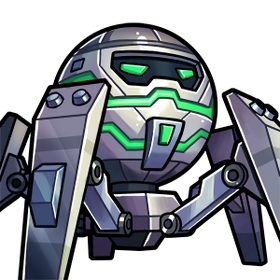 Mega Drone is an economic Colorless unit that consumes

Like other absorb-denial units, you want to buy Mega Drone in situations where the attack it costs would have been absorbed anyway. If we assume that 1

(a reasonable approximation), then a Mega Drone that denies no absorb costs 13 gold and gives you 4 income - less efficient than just buying Drones, but a Mega Drone that denies 4 absorb costs only 5 gold and gives you 4 income - an insane bargain that is worth making heavy compromises to get out. An efficient cost early for 4 Econ would be 11 gold, so skipping Absorb may be OK.

Mega Drone's blocking ability is also useful. Although you wouldn't want to sacrifice it since it has the same health as 4 Drones but doesn't provide granularity, it can be used as an absorber instead of Wall. This is extremely handy against burst damage, or if you are on a mono-red build so your other choice is to absorb on Rhino. While Attack is cheaper for Red, this will relieve an opposing mono-Red player.