From Prismata Wiki
Jump to: navigation, search
This article is a stub. You can help Prismata Wiki by expanding it.
Manticore

unit
(see more)
As an additional cost to buy Manticore, consume a Steelsplitter.
At the start of your turn, gain 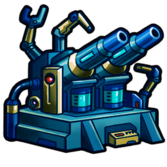 Manticore is a Blue unit.

If in order to buy Manticore you must first go out of your way to buy a Steelsplitter, it is almost certainly not worth it. Instead you should just go for a different attacker - even Tarsier would be a better choice. However, Manticore is quite efficient when you already have a Steelsplitter lying around, especially if you bought the Steelsplitter as you first attacker to avoid wasting blue but it is now being absorbed. Manticore in this situation can use its ability to gain you 3

instead of just running into a Wall. This makes it useful in games featuring heavy-blue legendaries such as Defense Grid or Apollo, as buying these units when few other blue units are available will often leave you forced to rely on Steelsplitters for a large part of your attack. It's especially useful in Apollo games because it's also a counter to Apollo - it can't be sniped due to its

4, and the Steelsplitter you have to buy first can't be sniped either while it's under construction.

Finally, due to its fairly high health, Manticore can be used effectively in gambits since you can allow a breach for up to 3 without suffering any serious damage.