, and consume a Drone: construct a Perforator
[data page] 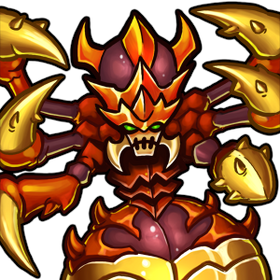 Red unit. It is very breach-vulnerable, and has the

ability to convert Drones into Perforators.

Lucina Spinos will often be the center of your strategy when you choose to build it, both because of its

ability and high cost. By itself it is a cost-efficient attacker, extremely vulnerable in case of breach, but what really defines it is the tech investment it requires; that combined with its ability will let you center your strategy around it to increase the pace of the game greatly through fast

red strategies use only a single Animus, and are played on low economy. Lucina Spinos builds are different, as its cost forces you on a rather high economy and its supply only lets you buy one. This sounds impractical because the

would go to waste after buying the single Lucina Spinos. The catch is that if your opponent doesn't counterattack immediately, you will actually be able to make use of it.

Lucina Spinos is best built in sets with no rushers, burst or

chill, otherwise the risk of early

attack or breach is too great, read the set with care. In those situations players may choose to go for a rather high economy build, since there is no way to easily threaten that path. Lucina Spinos, however, is a way to do just that. If you manage to build a Lucina when they start econing up, your opponent will have little

4 it provides. That will give you time to build Tarsiers or other

red attackers (Shadowfang, Immolite) before having to focus on defending yourself.

When your opponent starts dealing damage back, Lucina Spinos's

ability will start proving invaluable. You should click it every turn, without attempting to replace the Drones; the point of building Lucina isn't to win with econ on the long term, but rather to overwhelm your opponent as fast as possible. Since you have to avoid getting breached at any cost you will soon have to devote most of your resources to defense (in the form of Rhinos, or possibly Blood Pacts or Husks). The Perforators produced can both defend and threaten to make use of the leftover

damage. In practice it seems often more preferable to let a Rhino with

Stamina charges left die in defense rather than lose a Perforator, since it will likely be able to attack more times. The point is that both the Perforators and the Rhinos will threaten

damage to your opponent, forcing them to defend heavily without much resources available to fight back.

As stated above, Lucina Spinos's main build has rather strict requirements on the set. It is weak against:

On the other hand, Lucina Spinos does very well combined with:

Often it seems desirable to rush Lucina as your first attacker since she is so efficient and puts on so much pressure that you could easily find yourself locked out of getting her at all if your opponent gets her first. An extremely fast build is available to Player 1:

Player 2 usually rushes her via the following:

There is also a slower build for Player 1:

Player 2 may play this super fast rush with Galvani Drone:

With the Doomed Drone (1)

It may be better to use the Base line to prevent Player 2 from getting priority.

The quickiest rush for Player 1 is with Auric Impulse (1). Though it leaves a thin economy, it can overwhelm opponent. Doomed Drone or Galvani Drone improves the opening and defense as well.

Opening for Player 1 with Centrifuge (2) and Auric Impulse (1).

Can block a Rush to attack.