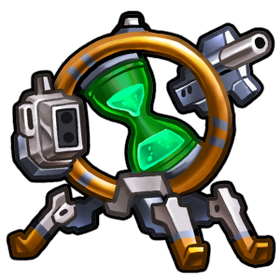 Iso Kronus is an offensive Green unit with

Exhaust makes it so it fires only once every two turns. When a player chooses to synchronize all their Iso Kronus to have them fire together, the turns where they don't attack are referred to as Iso Kronus off turns.

gold less, but every odd point of damage is delayed by one turn. It is also like a Tarsier that costs 1

for getting every second

A common strategy when going for Iso Kronus is to synchronize them and buy no other attackers so you deal damage only every other turn, reducing your opponent's absorb and increasing your burst attack. This technique has drawbacks though.

Even if you are also buying other attackers that are not compatible with that strategy, synchronizing your Iso Kronuses is still more efficient than buying un-synced Iso Kronuses, since the maximum attack is higher. This strategy works especially well if the set contains other units with the same

Fully synchronized Iso Kronus strategies are usually only good if there is something good to buy on the off turns with your green, preferably something bursty. Examples: