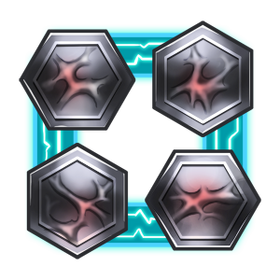 Infusion Grid is a defensive Blue unit. It's a very cost-efficient

Prompt) that can be broken down to provide more defensive granularity.

Infusion Grid is a very efficient

(gold and blue) for a

3 attack). It would be strictly better than the base set Wall, if not for the fact that it doesn't have

Prompt. As a result you have to buy it preventively one turn earlier, which is not always feasible (for instance against the burst from Gaussite Symbiote or Cluster Bolt).

1 over a Wall means that it can also absorb one more point of damage each turn. This makes it very important to get at least one Infusion Grid provided the set contains no even bigger absorbers. In fact, in the early game, against an opponent with

attack at1 or 2, buying an Infusion Grid instead of a Wall is usually better, since this allows you to get to 3 absorb right away at the cost of an Engineer (which is easy to replace if you even need the

Energy). If you buy the Wall you will probably just need an Infusion Grid next turn anyway, and you'd overdefend.

In the mid-game, when you have spare

1 red. While that denies one Grid's absorb, it instantly gives you a lot of defensive granularity. If Infusion Grid is your biggest absorber you want to keep at least one intact to be your final blocker, but if you have excess

converting some into Husks is generally a good choice.

Here is a good example of Infusion Grid's click ability being used to great effect: Z82l6-n4Kki. In this game, Tatsu Nullifiers were played on both sides, and so both players wanted to click their Infusion Grids to prevent the opposing Nullifiers from being able to chill anything big.