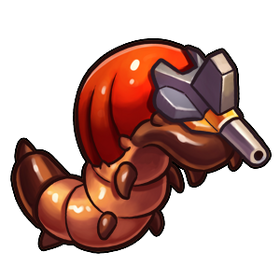 Immolite is an offensive Red unit. It's a very cheap attacker and a weak blocker with

While Immolite may appear weak at first compared to units such as Tarsier, attacking for only half as much while only being 1

Build time means it forces your opponent to buy defense sooner instead of more attack, which will allow you to buy more attack yourself instead of more defense. This feedback loop makes Immolite approximately as efficient as Tarsier overall. There are some additional advantages:

Whether or not you should synchronize your Immolite's attacks is situational. It is fine to have them firing on different turns as they are usually not your main source of

damage anyway (and often you will want to hold one back on the turn where they would all fire in order to exploit your opponent), but syncing their fire could let you increase your breach pressure slightly.

There is an all-in available to Player 1 that can surprise your opponent and confuse them if they are not familiar with it:

Likely one of the only "non-joke" openings involving not buying a single Drone, it lets you buy

1 constant damage per turn from turn 2, which can be hard to counter. There is a very simple solution however as Player 2:

This counter build involves getting a single Conduit and using it to buy as many Gauss Cannons as possible, using the leftover

Gold for Engineers. When you start losing Drones to breaches and can't afford Gauss Cannons anymore, build Forcefields instead. The superior

5 of the Cannons will lead to an eventual win against the more fragile Immolites. If Perforator is present though, the rusher can switch out of Red and play normally.

Delayed it exploits having the starting Defense.

Player 2's Gauss Cannon counter takes losses quickly or lacks the pressure, but gains a weakness from having frail Attackers as well.

This requires some red Absorber or Defense such as Ossified Drone to be reliable, otherwise, even turn Rhinos are the most efficient defense (No econ for granularity either)

Can have RE, but this requires a cheap Red sink such as Nitrocybe to be reliable and switch out.