2 (Chill 2: add 2 chill to target until next turn. Units with chill greater than or equal to their health cannot block.)
[data page] 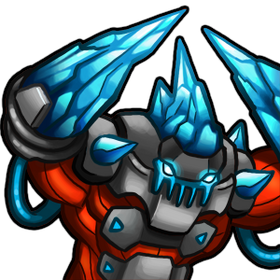 Iceblade Golem is a Blue-red unit. It's an aggressive

health that can also

attack, Iceblade Golems are one of the least efficient attacking units in the game. Being

frontline units, they're also susceptible to simply being attacked directly. However, their weaknesses are made up by a few strengths:

Thus, Iceblade Golems tend to excel against high-blue opponents situations, where they will be able to freeze through the enemy's defenses, as well as providing raw attack power, and a form of defense, as your opponent will most likely focus their efforts on removing Iceblades. Though, considering the Attack value as 5

, the extra cost thus being 2

2, means that often the opponent still has a larger cost to pay for

the next turn to compensate. If it forces more than 3

in defense per Iceblade, it's very strong value.

2chill means that it would require 2 Iceblades to chill a Wall. Supplementary

, such as Cryo Rays or Frostbites will allow for much more efficient chilling and thus allow for better use of the Iceblade's

As you will generally be committed to

Frontline due to Iceblades, others would also do well. Wild Drones will provide an economic boost to pumping out more Iceblades, and Hannibulls can be teched into if the supply of Iceblades are running out, or you simply need

Despite their strengths, Iceblade Golems are easily countered by breach-resistant units. Gauss Cannons are the primary counter against Iceblades: if your opponent can pump out at least one Gauss Cannon for every Iceblade, you'll generally end up losing. The primary advantage of Iceblades are their

freeze, which is rendered obsolete if there's nothing to freeze in the first place, and Iceblades are too attack-inefficient to push through breach-resistance. If you see your opponent building a Conduit, you should consider transitioning into Tarsiers with the Blastforge for Walls, or other units in the Random set.

In addition, Iceblade Golems are not

blockers. If your opponent can bring up enough of an offense, they don't necessarily have to focus on your Golems, meaning you'll have to shore up your own defenses in order to ensure you don't get breached.

Like most aggressive builds, this opening (available to player 2) punishes opponents that opt for a greedy economic opening or are slow to mount 6 points of attack. This opening resembles a typical large economy build for the first 3 turns, potentially lulling your opponent into a false sense of safety.

Exactly 14 Economy means it may crumble to instant pressure.

Starts 1 turn later but gets much more Defense.

Gets one Tarsier, but it's fast and efficient.