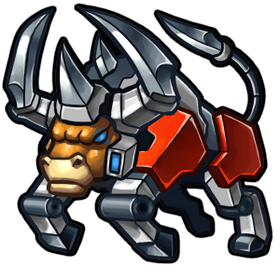 Hannibull is a Blue-red unit. It's a high

frontline attacker that can also be used to

frontline units, is most effective either in the early game or in the late game. A Hannibull rush can most often be defended. However, if you combine it with other frontline units like Iceblade Golem or Wild Drone it can pose a very huge threat if there are no good defenders in the set. It has the niche of granting invincibility if the user manages to pressure the opponent below 7 Attack.

gold available to spend the 2nd red that a normal Animus would give you. Mobile Animus can rush, though that makes exploiting it easier as well.

Another good way of using Hannibulls is to buy them in the late game, when both players are almost struggling on defense, as a 7 HP blocker that also attacks for 1 and threatens to attack for another 1.