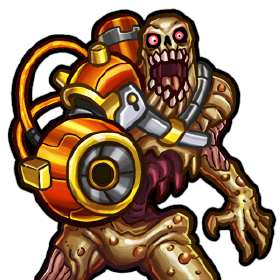 Grimbotch is a aggressive Red unit with limited

Lifespan that can also

Grimbotch is a cheap offensive red unit with a limited

4 lifespan. It can be thought of as a Rhino without

gold less and able to attack one more time.

The main use of Grimbotch is as a temporary attacker for the mid-to-late game, similar to how you might use Rhinos but much better. They are extremely efficient at this role, enough to often justify Animus in sets where you wouldn't otherwise want it. However, be aware that in most cases you should not buy Grimbotchs as your first attackers, becuse they will soon expire and your damage will stop increasing while you begin to fall behind in constant damage. Thus you would be better off starting with permanent attackers (such as Tarsiers) and transitioning to Grimbotches only when you have a respectable amount of permanent attack. The exception is when the opponent has only an Animus and few Drones with which to buy defense, as it will only take a small amount to damage to overcome them. For this reason it is often foolish to miror a very early Animus in Grimbotch sets.

As with all units with

blocker, Grimbotch is most efficient when used to take fatal damage on the turn that it would die. Mind the availability of counters to this strategy however. In a nutshell it is more useful as

attacking with it in cases when getting the absorb in defense is uncertain.