unit
(see more)
When Grenade Mech is bought, construct 3 Pixies.
At the start of your turn, gain 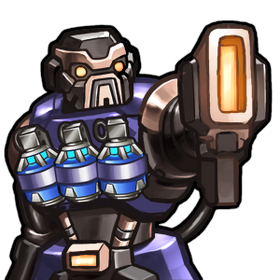 Grenade Mech is a

Blue unit. It's a high

health attacker that comes with 3 Pixies. It also has an

Ability allowing him to build 3 Pixies by consuming one Blastforge.

Grenade Mech is a rather situational unit. It is most useful against opponents with no access to good

blockers and relying on breach-vulnerable attackers.

Grenade Mech is not very efficient damage for its cost (though stronger than Base attackers when over Absorb), but it provides a large amount of pressure, with

4 attack on the first turn and the ability to sacrifice Blastforges for 3 more. 3 Pixies for 6 gold is a good enough deal that it often makes sense to continue clicking Grenade Mechs and re-buying Blastforges.

Buying Grenade Mech is mostly effective when you already have a large amount of persistent attack (e.g. from Tarsiers) to back it up, the spike in damage pressure can be overwhelming for an unprepared opponent. Starting with Grenade Mechs will usually be ineffective since it costs 10

just to get a single constant

attacker (The starting Engineers defend earlier as well), however, it can be a strong counter to rushes such as a fast Savior (Only to be tried with good soak) or low econ red rushes as the opponent will not be able to defend adequately. The Pixies can also be saved to gain offensive finesse, making defending against Grenade Mechs more annoying.

While Grenade Mech has

4 Health, keep in mind it is not a

health, however, allows it to be breach-resistant though. It is also worth remembering that Apollo cannot kill Grenade Mech.

This allows getting a Grenade Mech and S for some turns. The click is available when getting a Wall.