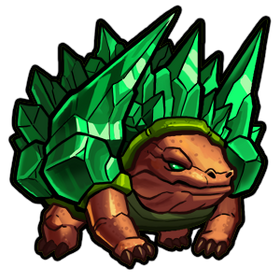 Gaussite Symbiote is an offensive Red unit that also produces

Green and can be sacrificed to create burst damage.

Gaussite Symbiote is comparable in functionality to a Tarsier + Conduit combination, which would cost 8

, it costs slightly more, but has a

build time of only

2, which is a huge advantage.

Being more cost efficient and faster, Gaussite Symbiote is likely to be relevant in any game featuring

green-red key units. It is even more relevant in

constant damage while giving you access to the units you want to buy (Feral Warden, Protoplasm) also a button to Burst the opponent critically.

ability of Gaussite Symbiote is not required to make it worthwhile, but it can help immensely in creating breaches. Make sure to use it at the right time though, as it both consumes a lot of

and destroys both your

source and one of your constant

attackers, leaving you crippled both economically and offensively. You typically want to activate it to form a huge burst of attack in combination with other units (The Wincer comes to mind), or in the late game to be the last bit of damage needed to push through your opponents defence. You can also use it to create a brief spike in attack to stop your opponent from purchasing an important legendary unit such as Defense Grid. In general, it is good value while it pressures, and without exerting the Supply. Using the Ability and replacing is paying roughly 14 Gold for 6 Attack next turn, same cost ratio as Gauss Charges.

Getting the 4 Gaussite Symbiotes and then saving green for 1 or 2 turns so you can click them all at the same time to force a large breach can be a quite a strong strategy in some sets. You should have sufficient permanent Attackers before doing this however, as if the Symbiotes are your entire attack force then you will be without attackers after the breach and will likely lose if you failed to wipe out all or most of your opponent's attack. This strategy is especially strong if the opponent has converted all of their Drones to Vivid Drones for example as they will then not be able to buy Forcefields or hold back Drones. Counters to this strategy include redundant defense units such as Ossified Drone or Urban Sentry, and relying heavily on attackers that can also block such as Doomed Mech, Grimbotch or Borehole Patroller. If you have an army of these units, you can convert some of your attack to emergency defense and avoid being breached. It also may not work if the opponent has nothing extremely vulnerable but instead has sturdy attackers such as Iso Kronus and Omega Splitter.

Some units that synergize very well with the Symbiote explosion strategy are Scorchilla and Endotherm Kit.

This build requires the presence of Protoplasm in the random set, and to be Player 2. It is probably the most powerful build that doesn't build any Drones, and the counter is pretty counter-intuitive.

8) constant damage very early, which is really tough for most early economies to handle. The simplest counter for Player 1 is to go for Blastforge without cutting Drones, and try to get an economy able to produce the

defense required to not get breached every turn (assuming you absorb with Walls), while saving a little

gold. Since Player 2 is locked and can't buy anything else than Protoplasm (Except TD plus click Symbiote), even saving 1

per turn can be enough to eventually increase the difference, get more Drones, then constant attack, and eventually breach and win.

This will punish Player 2 going for Fastimus, at the cost of losing 1 or 2 Drones. Also c

This benefits from a 3

Provides an early burst of

7 Attack vs a red-based opponent.

Sets for a large Attack burst.

A strong rush with 10 then 15 Attack. Units like Perforator, Galvani Drone, enable it.

Threatens a burst of 13 Attack.