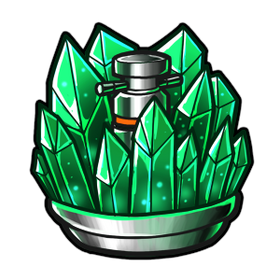 Gauss Charge is a Green unit. It can be built to increase

attack for a single turn.

Gauss Charges activate only once the turn after you purchase them. Therefore buying Gauss Charges does not augment your constant

attack, so it is mainly a utility or tech sink unit. For example, if you will lack

1 to destroy a Polywall next turn you can buy just one Gauss Charge to do so.

While Gauss Charges themselves can't be held, both ingredients (

gold) for Gauss Charges can be stored, making them very similar to Cluster Bolt. However, they are far less efficient due to costing gold, so they should generally not be bought unless you have extra green and nothing good to spend it on.

Gauss Charges are also produced by Venge Cannons and Gaussite Symbiotes, as well as Cluster Bolts, requiring an investment of

). However Pixie can be saved for a later turn unlike Gauss Charge.