3 (Chill 3: add 3 chill to target until next turn. Units with chill greater than or equal to their health cannot block.)
[data page] 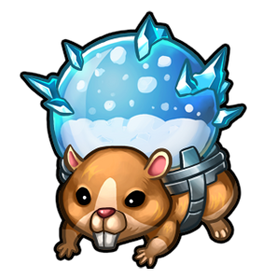 Frostbite is a Red unit. It's an inexpensive source of

chill, but it self-sacrifices at use.

Frostbite can be considered the

red equivalent of Gauss Charge and Pixie, in that it can be a sink for

that would otherwise have gone unused at the end of the turn.

3Chill, Frostbite is able to chill all defenders in the basic set, most notably Wall. Against breach-vulnerable units such as Tarsier and Shadowfang, Frostbites can be stockpiled to threaten a breach, forcing an opponent to spend an additional 5

for Walls to defend against each 2

Frostbite. A good counterplay to this is to build semi-breach-resistant units such as Drake and constantly allow small breaches (often for 0 or 1) since spending a large pile of Frostbites is a high cost to pay for only a small breach. Naturally, this counter is less effective if you have more vulnerable units such as Tarsier, but still applies. The only time it really doesn't apply at all is in games featuring legendary absorbers such as Centurion or Defense Grid, as in those games a breach for exact is fatal even if your opponent payed a high cost for it. Therefore Frostbite is usually very strong in games with legendary absorbers.

Frostbite is countered hard by vigilant defense units such as Xeno Guardian and Ossified Drone.

Since Frostbite chills for a fixed

3, having defenders with amounts of health that are not multiples of 3 (Forcefields and Infusion Grids, for example) can allow a player to defend more comfortably. In this scenario, since not every Frostbite is able to chill for the maximum amount, the defending player needs less total defense to avoid getting breached. On the other hand, Frostbites can be paired with other chill that may be in the random set, especially Cryo Ray, to chill for exact amounts and apply more pressure.

Frostbite is also produced by both Frost Brooder and Endotherm Kit.