6 (Lifespan 6: dies after 6 turns)
At the start of your turn, construct a Frostbite with 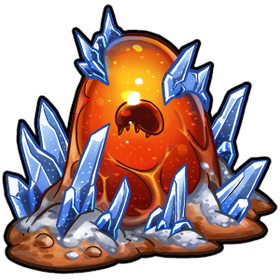 Frost Brooder is a Red unit. It slowly creates large amounts of

chill. However, it has a limited Lifespan

Frost Brooder builds one Frostbite each turn through its

6 Lifespan. The total amount of chill provided can go up to

9 which is very good considering its cost 5

red). In the long term the Frost Brooder will either allow you to breach your opponent or force them to devote an enormous amount of resources to defense, taking the pressure off you.

Note that the produced Frostbite has

1 Exhaust, so it can not be used immediately and can be killed if you are breached.

Take in account that Frost Brooder will give you

chill fairly slowly as it takes two turns to have the first Frostbite ready. Thus it may be better to build other chilling units like Shiver Yeti or Cryo Ray instead if you need this

Beware that a strategy relying heavily on the

Chill pressure but not your actual attack so when you do use your freeze you don't deal any significant damage and lose the pressure. (Of course, this is not the case in situations where a breach for 1 or 0 is fatal, such as Centurion or Lucina Spinos. In these situations Frost Brooder is an incredibly strong unit and it is probably good to buy all four of them.)