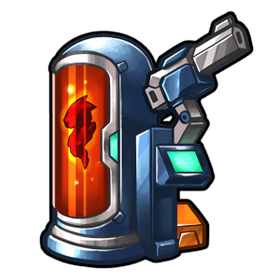 Flame Animus is a Blue unit. It produces one

Red, as well as

Flame Animus is a more efficient way to get

production than the standard Animus, so you should usually only buy Animus instead if either you need the red immediately or you don't have

to spare. Flame Animus is especially useful in sets where you need a single

red per turn and you would not use the second

red produced by a normal Animus, such as Tia Thurnax or Antima Comet sets. It can also be used to produce Hellhounds easily, or add the missing

red for an Amporilla or a Shadowfang without buying a second Animus.

Here is an opening using Flame Animus's natural synergy with Shadowfang for Player 1:

By turn 6, you can buy Shadowfang + Wall each turn and have a bit of extra gold to spend on Engineers, additional Drones, or whatever.

Player 2 has a similar opening which is slightly faster but ends up with less Drones:

Perforator or Blood Phage allow buying it out. Player 1: