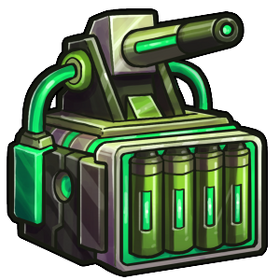 Fission Turret is a Green unit. It's an inexpensive, weak

Lifespan that can be

Fission Turret can provide you one

attack each turn throughout its

Ability gets you a burst of

3 green for the cost of

Gold and tech cost is rather similar to a Tarsier, with one

green instead of one

red. However, Fission Turret has a lifespan of

Generally, the best use of a Fission Turret would be to let it attack each turn and use its

Ability the turn before it dies due to

Lifespan. You have to make sure to have

3 energy at your disposal for this specific turn. Therefore, Fission Turret has good synergy with Engineer producing units, such as Hellhound or Sentinel.

Ability gives you the

green for one high green cost units like Asteri Cannon or Cluster Bolt on a single Conduit. In sets with such units, you might want to buy one Fission Turret each turn to be able to continuously pop them. It also makes Forcefield very efficient, as the essentially free

comes for a loss of 1

or so at most, Engineers are non efficient soak.

Fission Turret can also be use as a fast source of

damage at any point in the game when you want to put pressure on your opponent immediately even if you do not plan on using its ability.

Player 1 has an efficient way to get the first Conduit while cutting only a small amount of economy if Fission Turret is in the set: