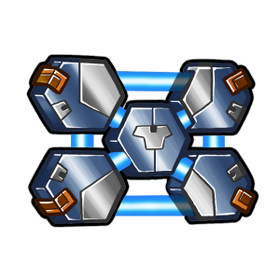 Energy Matrix is a defensive Blue unit with high

Energy Matrix is of a similar cost-to-HP ratio as Wall, but also provides

2 of absorb more than the standard Wall, allowing for a way more efficient defense over the course of a game. It is therefore very important in an Energy Matrix game to use one of these as the backbone of your defense instead of a Wall.

When you see Energy Matrix in a set, you know that early attack can be absorbed very effectively, so you should probably purchase a third Engineer on your second turn as you will want a lot of Drones before you start making attack. However, although this is true of most random sets that contain Energy Matrix, base + Energy Matrix and no other units is a curious exception, see below.

Since Energy Matrix's supply is very limited, it has to be supported by other defenders (for instance Walls or Chieftains). Also if you have no other defenders with lower health it can be easy for your opponent to take advantage of its high

Base + Energy Matrix has been analyzed a lot by many strong players and discussed on reddit (https://www.reddit.com/r/Prismata/comments/6uuool/apparently_in_basematrix_you_dont_go_3rd_engineer/). Their conclusion is that player 1's winning move is the common build "Natural Animus" (DD/DD/DDA) and player 2 cannot defeat this line by going 3rd Engineer (or by mirroring low-economy). There are a number of factors that contribute to this being the case despite Energy Matrix generally being a high-econ enabling unit:

The player 1 Natural Animus in general has the property of being naturally high econ, as it can go by DDA/TTD/TTDD/ then TRDD/TRBE for the Blue defense, for exact.