4, and construct 4 Cryo Rays with 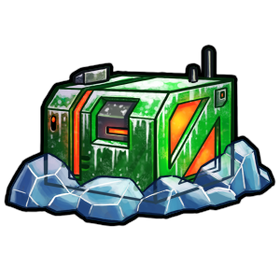 The Endotherm Kit is effectively a time-bomb of

Chill, providing a burst of 16

Chill with a rather lengthy

build time of 4 turns. It's also somewhat efficient by weight, as the components would cost 12

total. However, it has a long

build time, worse than just twice as long overall, so the opponent gets time to build up to defend against it, thus, the best usage of Endotherm Kit should be to threaten a breach with the freeze, but not actually breach. While your opponent needs to build up defense inefficiently against your

Chill, you can easily build up your economy and

However, neither the Cryo Rays nor the Frostbites can perpetually freeze

blockers. Thus, whatever additional defense your opponent builds to defend against the Endotherm Kit will still be around. Either you'll need to use the economic advantage of having less pressure for getting

blockers, to build up more

attack, or use the burst

Chill to do a damaging breach, such as destroying an important 1

Health unit like Lucina Spinos. Even the destruction of Drones can prove handy, as setting your opponent's economy back is generally always useful. It is also a crushing advantage when the set has units with Lifespan, as the

Chill can be used as targeted Attack, or to deny such units from being efficient Soak this way.

However, another way to react to an Endotherm Kit isn't to build additional defenders, but to build up a breach-resistant defense, via

Green units such as the Gauss Cannon. The

Chill isn't terminal, thus the one-time burst for a breach is much less efficient than what it would be with units such as Tarsiers. Should this happen, generally you'll want to keep your units back, and build up

Attack to eventually break through.

It should be noted that you can only purchase a single Endotherm Kit per game. You thus can't threaten additional

Chill after the first kit without other units. If one is going to use the

Chill, it should either be to breach and deal significant damage (via the Frostbites) or freeze off granularity to force an inefficient defense (via the Cryo Rays).

Requires synergy for Green. Scorchilla can set a combo.