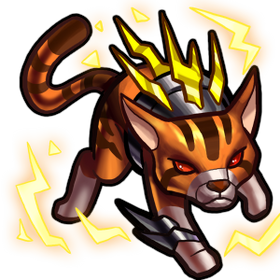 1 attack in exchange for

1 Energy. It costs as much as Tarsier, but only takes 1 turn to construct, allowing you to put pressure earlier. You can also use Electrovore to

block, at which it is as efficient as a Rhino, providing either

2 Health of defense or

consumption of Electrovore needs to be accounted for in your build, for instance in the early game if you want to go on increasing your Drone count or later when Engineers start dying in defense every turn. Having to keep Engineers alive (or buying more continuously) is something of a hidden additional cost to the unit.

Electrovore comboes nicely with units like Antima Comet, Hellhound or Sentinel that end up putting lots of Engineers on your board without using the

You generally should buy at least 1-2 Electrovores in games where you wanted an Animus already. Although you will have to keep buying Engineers to keep them firing, this is okay because in most games you want to be buying some Engineers anyway for defensive granularity, so the first 1-2 Electrovores don't really have that extra cost.

Electrovore can enable powerful rushes if there are no strong defenders in the random set. Here are example builds for both players. For Player 1:

Both of those build force your opponent to buy a blocker one turn earlier than they would if you had gone for Tarsiers.

The player 2 Electrovore rush is very powerful, and may not be beatable with just the base set. The basic premise is that you are using all resources very efficiently (including the

Energy produced by the first 2 Engineers), and using Rhinos will full efficiency. Damage ramps very quickly until the opponent counterattacks.

To counter the rush, player 1 must find a way to get 7 sustained attack. If this doesn't seem viable with your random set, player 1 could try a turn 2 Electrovore rush. However, this rush is weaker than the player 2 rush, and cannot beat a properly played Blastforge into Conduit counterplay unless there are some other

Note that the Animus counter (mirror) is slightly behind in tempo, and loses for player 1 (with proper play from both sides). The Blastforge counter is slow, and allows the player 2 to ramp

attack considerably. It's only viable if it allows player 1 get a cheap pressure unit (like Tesla Coil or Plasmafier) or a cheap unit with big

absorb (like Doomed Wall or Energy Matrix). With only the base set, player 1 needs to spend all resources on defense before he can get 7

The main Blastforge line is:

And the Animus line is:

Until your opponent puts out his first

attack, buy only Electrovores, Tarsiers, and Engineers. Of course, buy Electrovores when you'll have the Engineers to power them next turn, and Tarsiers when you won't. Spend all of your

gold each turn, as is possible.

After your opponent has

attack, build 1 Rhino per turn. Calculate your opponent's max damage, and determine how many Engineers you'll have left. Buy enough so you can fire all Electrovores next turn. Spend the rest of your money on Electrovores, Tarsiers, and Engineers, as applicable. Ramp

attack as much as possible.

If your opponent bursts

attack, and you don't have enough

defense, it's better to hold back an Electrovore than to hold back a Rhino. You can think of the Electrovore as a cheaper Rhino which has paid itself off. Of course, use this tactic situationally. Note that it's almost always wrong to build 2 Rhinos in 1 turn.

Here's an example game, using Blastforge defense, with the base set + Electrovore: http://play.prismata.net/?r=ZzIkw-mkKzJ . Note that player 1 gets to 6

attack, but can never get the 7th point of attack. If such a line were found, that would refute the player 2 electrovore rush.

Here's an example game, using Animus defense (mirror), with base set + Electrovore: http://play.prismata.net/?r=n@65A-dENdn . Note that player 1 is always a point of