unit
(see more)
At the start of your turn, gain 2 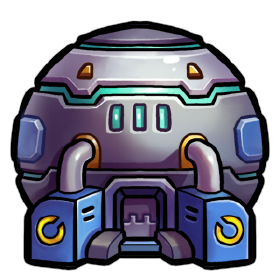 Ebb Turbine is a Blue unit.

Ebb Turbine is essentially two Drones for the cost of one Energy, which makes it useful for increasing your economy quickly without buying several Engineers. It can also act as blue sink since you can click two Ebb Turbines and buy another Ebb Turbine to sink blue that you would otherwise waste. Be careful of doing this too much, however, as it can actually be counterproductive: you are preventing two of your Drones from ever blocking or being turned into Forcefields for no benefit except the ability to click more Ebb Turbines at once, which is generally useless if you already have 3+ Ebb Turbines.

Ebb Turbine is useful for affording a one-time purchase of a heavy unit such as Asteri Cannon when you don't have the econ to buy one every turn and still hold off your opponent's attack.

Even if there's nothing in particular you want to buy with it, the click ability of Ebb Turbine is usually excellent value in the late game, because Drones are not worth 3 gold anymore. Ebbing your Drones into a larger number of Engineers is a good way to set up defense for the next turn, since in the late game you are probably bleeding Drones for defense every turn anyway. You can also Ebb two standard Drones into 3 Doomed Drones, which is almost always great value if the Doomed Drones will be able to defend on their last turn.

Ebb Turbine also has synergy with double-Animus units in general (such as Shadowfang, Tatsu Nullifier and Amporilla). These units are incredibly efficient attackers, and Ebb Turbine can provide the burst of gold you need to squeeze out one or two more Shadowfangs for example before you have to devote all resources to defense.

Finally, keep in mind that the click ability of Ebb Turbine refunds the energy from the Drone as well. This makes it useful in combination with energy-consuming units such as Galvani Drone or Electrovore.