, and consume a Blastforge: gain 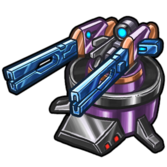 Drake is a Blue unit with high attack which threatens more

damage thanks to its

2 attack each turn and has the

2 more attack by consuming a Blastforge.

2 attack is a high price, you usually only want to do it if it allows you to breach or at least kill an important defender such as a Borehole Patroller.

Drake's cost for a regular attacker is slightly over 2

over a good cost, yet it forces 2 Prompt defense from opponent right after, making it very strong. From there, using the Ability itself actually 'honors' the opponent's defense, paying the cost and removing the threat advantage.

Another case when you will want to use this

ability is if your opponent has built a unit such as Amporilla and you absolutely need to pressure them as much as possible to stop them from buying more double-value Tarsiers. It is also good to attack cycle Blastforges if the opponent's soak price is high, or makes it fall short of an efficient turn.

Drake can also be used to transition out of heavy blue. For example, if you were forced to buy 3 Blastforges to get Defense Grid, you can buy a Drake afterward and use its click ability to get rid of the unwanted Blastforges and transition into green and/or red tech. Of course, it is advisable to keep one Blastforge per Drake around so they can all continue to threaten damage.

Note that if you have exactly one Blastforge per Drake and you click a Drake without replacing the Blastforge - and you don't breach - you don't actually deal any damage. When you're not breaching, attackers get value by forcing your opponent to buy defense. But if you lose the Blastforge when you click the Drake, then 2 of your threat is becoming fake, so the opponent doesn't actually have to defend for any more than they would have if you didn't click it. Of course, you may want to click it anyway if the Drake click exploits or kills a defender that is producing something, such as a Borehole Patroller).