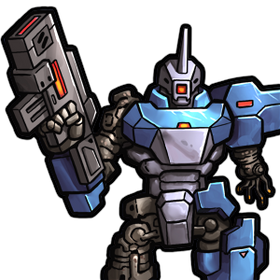 Doomed Mech is a

attack, but with a limited

Lifespan. It is part of Antares.

Doomed Mech is efficient at both

attacking, but has to be timed right to make maximum use of its

Lifespan. It has good cost ratios in both

Health, making it very versatile; it can be used to counter early rushes thanks to its high absorb and

attack threat, but can also participate in late game

Block, Doomed Mechs are at their most valuable when sacrificed

blocking on the turn they would die due to their

Lifespan. Doomed Mech derives enough of its value from this that it is probably a poor purchase if there won't be enough incoming damage on its last turn to get full value.

Even when not on its last turn, in a Wall absorb game, it is generally good to block with one of your Doomed Mechs each turn and use it as an absorber instead of Wall. Doomed Mech's

Doomed Mech is vulnerable to being countered by

chill units such as Shiver Yeti or Cryo Ray, or especially Nivo Charge, as Doomed Mech's

5 hp helps the Nivo get full value when normally it would waste part of it by freezing a Wall.

Doomed Mech is excellent at dealing with non-flexible

synced attackers with Exhaust, as you know precisely when you will need to have it die on defense and can time it accordingly. For instance against an opponent syncing their Iso Kronuses, buying a Doomed Mech on the turn you take damage ensures it will be on its last