7 (Lifespan 7: dies after 7 turns)
At the start of your turn, construct a Drone
[data page] 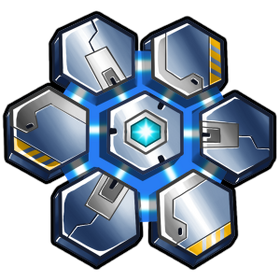 Defense Grid is a defensive Blue unit with high

Health that also constructs Drones during its limited

Lifespan. It is part of Antares.

Defense Grid is the strongest wall in the game with its

7 Health, giving it the ability to absorb up to

6 attack on its own, twice the Absorb of Infusion Grid. It is one of the best defensive units, although its limited

7 Lifespan makes it less reliable than Centurion for instance since you have to plan for what happens after your Grid expires.

Defense Grid is a support unit, and as such does not put pressure on your opponent. It should not be your first priority: invest in

attack first. Only go for it when your opponent is about to get over

6 constant attack per turn. Also remember that since Defense Grid does NOT have

Prompt, you have to anticipate this damage increase one turn in advance to get maximum efficiency.

Given its high tech requirements, Defense Grid might not be worth purchasing if there are no good

blue attackers in the random set or cheap ways to spend blue such as Pixie, as the

tech investment will be wasted in the long term.

Block, Defense Grid is at its most valuable when used to take fatal damage on the turn right before it would die. Though on that turn you will be vulnerable to the usual lifespan blocker counters, the value provided by the high absorb makes it still worth it anyway.

The additional Drones constructed by the Defense Grid are a nice bonus, but they should not be considered a reason to go for it. Considering it costs 10

for twice of Infusion Grid's absorb, the 6

cost of the Drone building is slightly mediocre already, and without support, the Tech cost will be a large burden soon.